Back to UCDS Schools Blog
May 19, 2020 | By UCDS Communication
Share

About five years ago, I was teaching in a pre-K classroom of rough and tumble four- and five-year-olds at an early childhood center North of UCDS.  Everything about their play and their relationships was high intensity.  Some in my teaching team were worried about the frequency of big body play that this crew had brought into the classroom, and I was concerned that we were not meeting them where they were.  If we wanted to teach the folks in our classroom (instead of to a curriculum imagined before they even arrived) we had to start cooking in the right flavor palette.  That is when someone forwarded me Teacher Tom’s blog post on Wrestling Time in his classroom.

Wrestling Time in our classroom was born the very next week.  First, we sat down with a clip board.  And I wrote “Wrestling is fun because…” Everyone was quick to answer.  It felt good.  It felt silly.  It felt exciting.  One child said, “when I wrestle with my brother it feels kinda like he is sleeping right next to me.”  I was so struck by this comment, I stopped transcribing for a moment to let it sink in.  The way that adults have long conflated wrestling with fighting never felt quite right to me, but the degree to which this kind of play and sensory experience was linked for children to feelings of closeness, relationship, intimacy, and most of all care for one another was new to me. 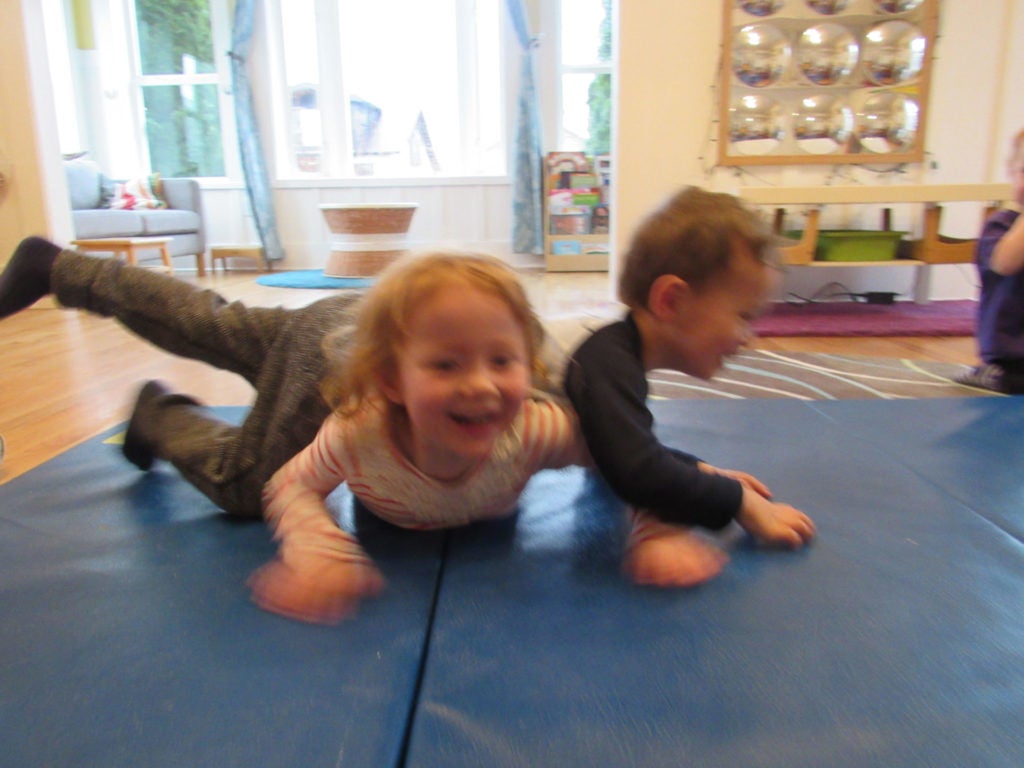 Wrestling, I came to discover, is a practice of care:  one way to show how we care for one another, negotiate relationships and closeness. The questions that our classroom found ways of posing to each other, then were: How could we make wrestling something that had an honored place in the class within boundaries that kept us all feeling safe? How could boundaries help us focus on the friendship-building aspect of wrestling instead of the “aggressive” bad-guy play that it is so often associated with? How could wrestling be about demonstrating caring and affection and fun instead of demonstrating dominant strength or carelessness with others’ bodies?

Back on our clipboard, I wrote, “Wrestling can be scary when…” Children listed ways that your body could get hurt or that a friend could get upset with you.  They were specific because they were experts in this play.  Regardless of whether they had mastered the in-the-moment self-regulation, they knew exactly when and why things could go wrong.  It was from this place that we started generating expectations, rules, and rituals.  I wrote, “So…how do we do Wrestling Time?” 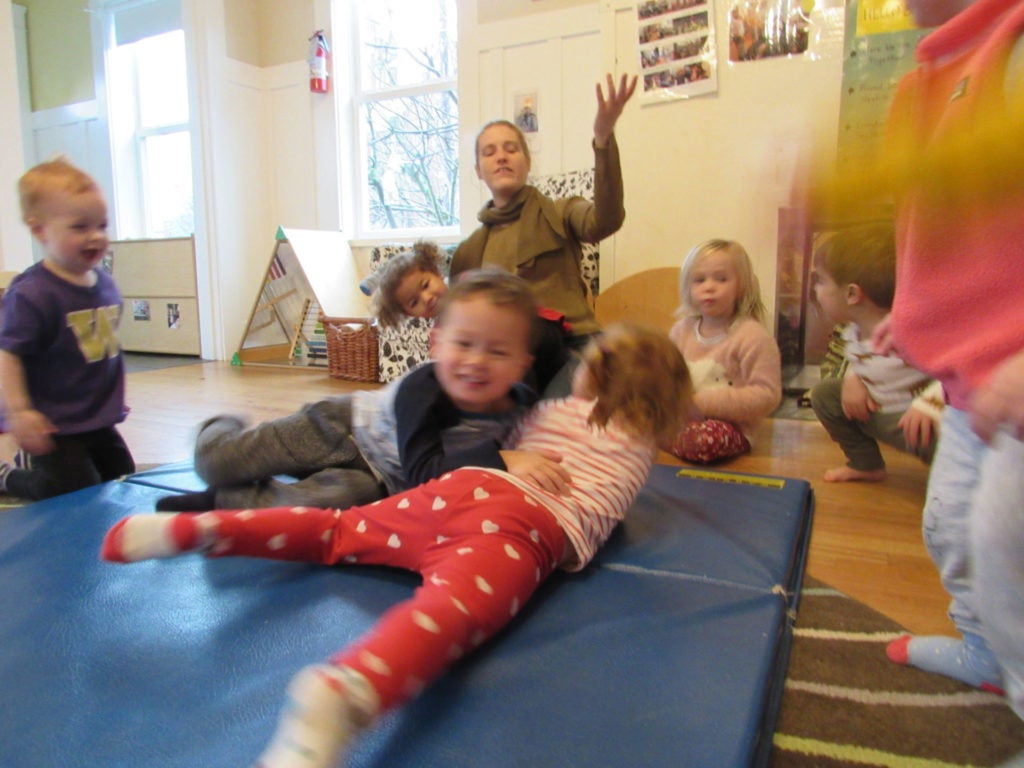 I wrote this contract with several classes over the years and each time children produced detailed and thoughtful documents.  In almost every case there were some key elements:

The latter was always my favorite part of wrestling time.  It was like (and sometimes we described it explicitly) as asking someone to dance.  It was something that was so thrilling for children, to show their care and excitement for their friends and also to practice understanding that if someone was “not up for it this time” that didn’t threaten their friendship.  Additionally, what I had not expected was that Wrestling Time nurtured new relationships in our classroom.  Children who had never gravitated towards each other in a meaningful way before would seek each other out during Wrestling Time.  Children who might have experienced a peer as ‘too rough’ or interested in ‘scary games’ was understood as one of the most fun wrestling partners. This shifted their identity during the rest of the day, opening up possibilities for them to be a trusted partner in a mama-baby game which they had never been invited to engage with before. 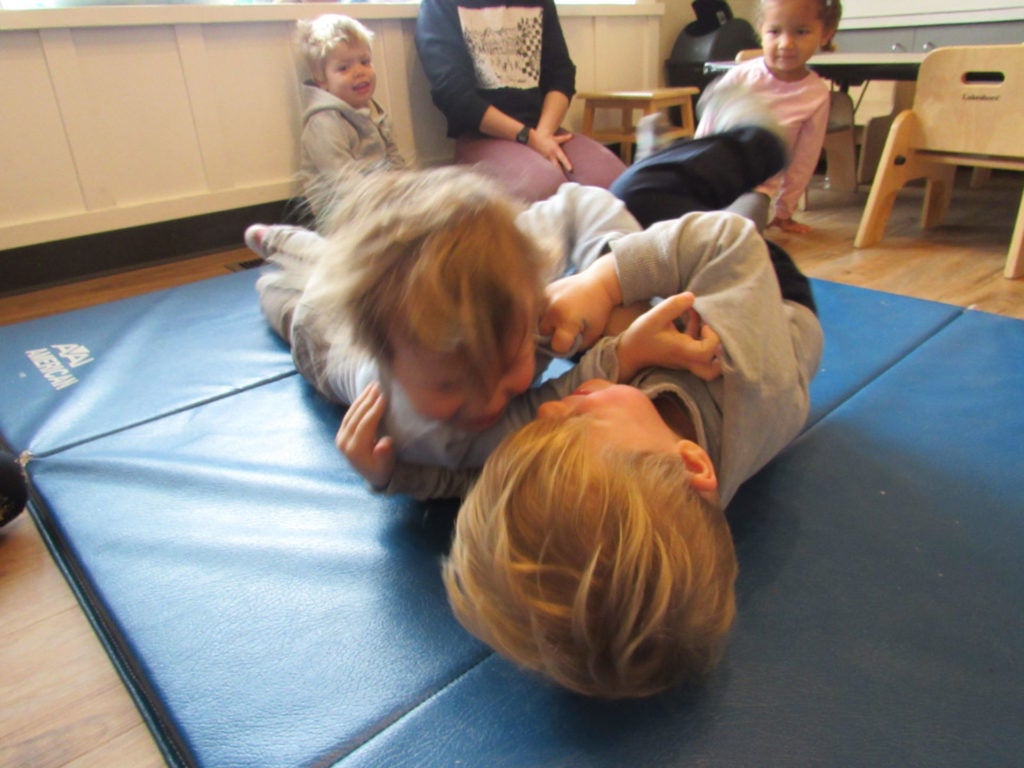 Wrestling Time was something that liberated all of us from so many of the expectations that governed our days together.  In a given week, everyone wrestled with everyone, always, without prompting. Children were learning the subtle and sophisticated cues of their peers—becoming experts in how to wrestle differently with each child depending on what they enjoyed and what their boundaries were. Kids who might have seemed timid, or as educator and theorist, Vivian Paley might put it “always in the doll corner,” were just as keen to wrestle as the self-proclaimed monster in playground chasing games.

This also meant that if energy in the classroom was getting heated on any given day, we could just say “Oh, it’s not Wrestling Time right now. We wrestle on the mat in the social hall. When should we schedule Wrestling Time?” Sometimes it got scheduled immediately or for that afternoon. And sometimes, interestingly, the response was to stop and say “we don’t need Wrestling Time right now, actually.”

–“Your Image of the Child: Where Teaching Begins” by Loris Malaguzzi

At the beginning of this year, my co-teacher Desiree brought an article to our monthly staff meeting to help us reflect on big body play at the Studio.  The article (“Big Body Play: Understanding and Supporting It” by Frances M. Carlson) began: “In spite of its bad reputation, rough play is a valuable and viable play style from infancy through the early primary years—one that teachers and families need to understand and support.”  The more we talked the more we wondered if Wrestling Time could come to Studio this year.

The article outlines the ways that this kind of play is still misunderstood, pointing out that The Child Development Association still writes its standards and expectations for “rough play” being “minimized” by teachers.  These expectations “are based on the assumption that play fighting [or wrestling] typically escalates or that children are often injured while playing this way.  However, neither assumption is true.” I found much of the article to resonate with my own experience:

Rough play provides a venue for showing care and concern as they often hug and pat each other on the back during and after the play.  Rough play also allows young children to have their physical touch needs met in individually and age appropriate ways and provides an opportunity for children to take healthy risks.

It also gave us a window into the brain science behind big body play.  Movement and cognitive development have long been understood as linked in important ways.  Researchers now believe that big body play is connected to some of the most critical brain development we see in early childhood:

Rough play between peers appears to be critical for learning how to calibrate movements and orient oneself physically in appropriate and adaptive ways.  There is evidence that rough-and-tumble play leads to the release of chemicals affecting the mid-brain, lower forebrain, and the cortex including areas responsible for decision making and social discrimination; growth chemicals positively affect development of these brain areas.  In other words, rough-and-tumble play, this universal children’s activity, is adaptive, evolutionarily useful, and linked to normal brain development.

Rough physical play is not about domination, but about reciprocity.  Setting safe boundaries that support this kind of play helps make the distinction between fighting and wrestling clear for children and adults. Wrestling is yet another opportunity for us to practice turn taking, resilience, nonverbal communication, compromise, and all of the social-emotional skills that allow play and relationships to be sustained and flourish. These classroom agreements should not just address physical safety, but also access.  We should consider what we want everyone in our classroom to be able to benefit from:

Children with disabilities or developmental delays tend to play more passively; they watch more and initiate less…make sure opportunities for big body play are available for all children by providing active supervision and supporting each child’s attempts to use [their] body in new and challenging ways.

At Studio, if we wanted to explore Wresting Time as an option, we wanted a student with a cochlear implant and a student with a broken arm to be full participants.  We knew they would blossom on the wrestling mat in all sorts of new and unexpected ways.

Could we do it at Studio?

Wrestling Time in my classroom had always been with four and five-year-olds.  When I arrived at the Studio this year, it was not at the top of my list of things I had in mind to share with new coworkers.  If you had asked me whether I believed we could do it with two and three-year-olds I think I would have said yes, but differently.  With experience, we’ve discovered that it is surprisingly similar.  The things I knew were important about wrestling in a pre-K context are merely heightened.

One thing that became central to the “referee” role in my former classroom was real-time play-by-play broadcasting as children wrestled.  Each move was given a colloquial name or described. We would excitedly yell out: “Nitzan is down and Martin is up, what will happen next? Ah, Nitzan is up again, they are spinning! They are…it’s a hugging take-down!”  We came up with all sorts of vocabulary for the kinds of wrestling we saw that was accurately and compellingly descriptive and also had connotations with the relationship-building we believed was happening; we avoided fighting lingo.

At Studio, teachers have taken on this role with gusto, understanding the important work of putting language to what we are doing.  It keeps each moment defined in terms that keep us safe and having fun. It gives children time to think and be intentional as they are making their next move, and it gives them more real-time feedback so that they can readjust if they hear an adult’s tone change, or encouragement to check-in with their friend.

The importance of ritual continues to stand out.  When Studio kids see the mat go down, they remind each other to take shoes off and check their pockets and hair for “sharp things.” We sit around the edge of the mat together and remind each other how wrestling happens in our class. When it comes to asking each other to wrestle, it is always magical to see each face light up. These preparations are not only about safety and the logistics of consent, but they become important scripts—physical, sensory reminders that we are entering a special space with particular expectations of care and respect.

Six Highlights of an Innovative School • Being Brave

Six Highlights of an Innovative School • Mentorship Through Collaboration